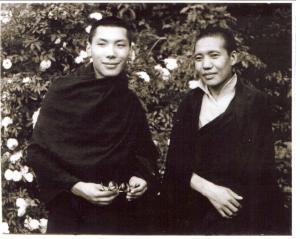 It is now fifty years since Chogyam Trungpa Rinpoche and Akong Tulku Rinpoche co-founded the first Tibetan centre in the West, in rolling hills of southern Scotland. These fifty years have given us much to celebrate. Locally, we have had five decades of continuing growth at Samye Ling and, internationally, the development of Akong Rinpoche's spiritual, humanitarian and therapeutic works in four continents, bringing benefit to the lives of tens of thousands of people.

In 1967, the two Rinpoches named their centre after Samye, the first successful Buddhist establishment in Tibet. They were soon joined by master-artist Sherapalden Beru and the monk Samten. By 1970, Trungpa Rinpoche had departed for the USA and His Holiness the 16th Karmapa firmly encouraged Akong Rinpoche to take a leadership role in developing Samye Ling. The early 70s saw a progressive strengthening of Buddhist practice with visiting courses being given by Thai, Burmese, Japanese and just a few Tibetan teachers. 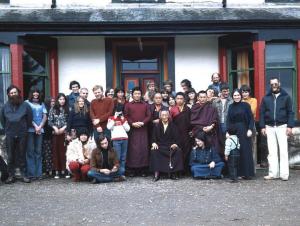 The second visit of Khyabje Kalu Rinpoche, in 1974, was an important milestone. Accompanied by five lamas fresh out of retreat, he gave the first formal Vajrayana empowerments in the West and the distinctive Tibetan sounds of jaling and ra-dong first rang across the green valley. He inspired many people to begin traditional Kagyu practices 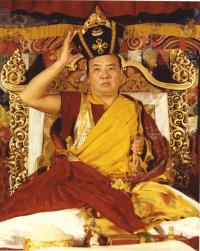 The next milestone came soon afterwards with the two visits by His Holiness the 16th Karmapa. On the second visit he was accompanied by Jamgon Kongtrul Rinpoche and a party of a dozen tulkus, lamas and monks. His Holiness performed the Vajra Crown ceremony and gave empowerments and teachings. Most significantly, he assured Akong Rinpoche about the longer-term future of Buddhism in the West and at Samye Ling. This became the basis for developing the Samye Project to cater for the future demand he foresaw. This seemed very ambitious at the time, but not so with hindsight. The Karmapa's visit also saw the establishment of our first international branches, in Belgium, Spain and Ireland. What seemed to be his playful joke in 1977 - as he ruffled Akong Rinpoche's frizzy hair and called him 'Africa Lama' - turned out also to be full of foresight as Rinpoche several years later became the Karma Kagyu representative for Africa as Kagyu dharma developed there.

During the late 70s and early 80s, Samye Ling benefited greatly from being the major Kagyu centre in Europe and one of very few Tibetan centres in the West. Some of the most eminent masters from the Kagyu tradition came to stay for periods of several months, giving them the time to teach in detail major Buddhist texts and practices to an international audience. We were particularly indebted to the regular visits of the Chamgon Khentin Tai Situpa, Khenchen Thrangu Rinpoche and Khenpo Tsultrim Gyamtso Rinpoche , and also to the Goshir Gyaltsabpa for his long stay in 1983. Nowadays such eminent teachers have so many centres worldwide that their visits are counted in days, not months. We were also deeply honoured by the visits of HH the Dalai Lama, HH Sakya Trizin, HH Dilgo Khyentse Rinpoche and Khamtrul Rinpoche.

The overriding theme of the early 1980s was the construction of the temple, with all the work being done by members of the community, which grew considerably in size and talents for the purpose. Under the direction of Sherapalden, our resident artists and craftspeople produced all the images, carvings, paintings and decorations that are now so admired in the new temple. At the same time, the first long-term retreat started, Rokpa's humanitarian work grew and the Tara Therapy started to evolve. 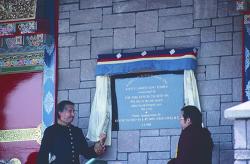 1988 was a key moment. The Samye Temple was inaugurated and the first four-year retreat was successfully completed. Lama Yeshe Losal Rinpoche, who had come here on a brief visit from his long solitary retreat in America, stayed on at Akong Rinpoche's request, first in continued solitary retreat, and then as resident master for the second long retreat that began in 1989.

Since Akong Rinpoche spent more and more time on humanitarian work in Tibet throughout the late 1990s, Lama Yeshe Rinpoche kindly took an increasing responsibility for running the Centre and enthusiastically built up the monastic sangha, developing Samye Ling as a unique experiment combining monastery, nunnery and lay community. Lama Rinpoche became Abbot of what was now known as Samye Ling Monastery and on the occasion of his 60th birthday received the title 'Rinpoche' for his vast dharma attainment and activity. 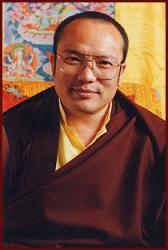 Throughout the 1980s and 90s, Vajradhara Chamgon Tai Situpa was extraordinarily kind and generous in visiting Samye Ling. In response to Akong Tulku Rinpoche's earnest request, from 1989 through to 1997, Situ Rinpoche gave the Mahamudra transmission emanating from the Saraha tradition of mahamudra, and taught in detail from The Ocean of Certainty text by the 9th Gyalwang Karmapa. Thus the greatest masters have transmitted the very essence of the Kagyu teachings here, and Samye Ling continues to be a place where the ancient wisdom of the Buddha's teaching is both preserved and made available to a new world.

In 2007 we celebrated our '40th' in the spirit of never forgetting the essential points behind the spiritual, humanitarian and therapeutic activities that have grown out of Samye Ling. These are: to accomplish whatever we do in a spirit of loving care for all beings that stems from the boundless heart of compassion; to help  all beings discover that it is in serving others that they best serve themselves, find happiness and fulfil their own life potential; to promote a message of peaceful co-existence and taking full responsibility for our precious human lives; and to preserve and share the precious jewels of the wisdom and meditation teachings which had been so well preserved in Tibet.

Between 2008 and 2012 all energy and resources went into building the final two wings of the Samye Project.  On completion, the new buildings became home to the Reception and Administration offices amongst other things, changing the administrative focus of Samye Ling from Johnstone House to the Temple complex.  In addition, they housed a state of the art 300-seater lecture hall for conferences and big events.

Then on 8th October 2013, our Founder Akong Tulku Rinpoche died in tragic circumstances in Chengdu, China. Although this stunned his many followers, with the guidance and inspiration of Akong Rinpoche's brother and Regent, Choje Lama Yeshe Losal Rinpoche, Samye Ling continues to develop and flourish.

Kagyu Samye Ling is currently under the spiritual direction of His Holiness the 17th Gyalwa Karmapa, Orgyen Drodul Trinley Dorje, and the Vajradhara Chamgon Khentin Tai Situpa. We are deeply grateful for their continued and inestimable support. The next major milestone will certainly be the visit of the Gyalwa Karmapa and we look forward to it with great joy and eagerness.

This short overview is to help us recollect with gratitude all that has contributed to our fifty years of growth, to appreciate the kindness of the Buddha in giving his profound teachings, and of the Tibetan masters who have skilfully presented them here.