Born in 1943 in Kham, East Tibet, Lama Yeshe spent his formative years in education at Dolma Lhakang Monastery where his brother, Akong Tulku Rinpoche, was Abbot.  After a harrowing ten month journey escaping from Tibet as a teenager in 1959, Lama Yeshe arrived in India along with Akong Rinpoche, Chogyam Trungpa Rinpoche and a handful of other exhausted refugees.  On leaving the Tibetan Refugee Camp he attended the Young Lamas Home School in Dalhousie and left in 1967 to serve as Private Secretary to His Holiness the 16th Gyalwa Karmapa at Rumtek Monastery in Sikkim.

In 1980 he took full ordination as a Gelong monk from His Holiness the 16th Karmapa, on the auspicious date of the anniversary of Lord Buddha's Nirvana and Parinirvana, at a ceremony attended by the most eminent Tibetan Lamas of the time.  Following his ordination Lama Yeshe entered a strict, long-term solitary retreat under the guidance of the Abbot of Karma Triyana, Khenpo Karthar Rinpoche.  Lama Yeshe also received teachings from many of the highest Kagyu Lamas, including extensive instruction and initiations from his root guru H.H. the 16th Karmapa,and from The 12th Tai Situpa, Jamgon Kongtrul Rinpoche, Gyaltsap Rinpoche, and the Very Venerable Kalu Rinpoche.

In 1985, at the request of his brother Akong Tulku Rinpoche, Lama Yeshe returned to Scotland to continue his retreat at Samye Ling Purelands Retreat Centre and in 1989 became Retreat Master with responsibility for the western practitioners in the cloistered four year retreat.  Despite his heartfelt wish to remain in retreat for twenty years, Lama Yeshe was obliged to return to the world in 1991 to take responsibility for the running of Samye Ling and also to oversee the newly acquired Holy Isle Project. 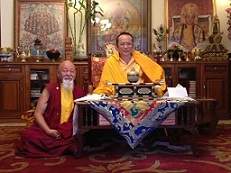 After a vigorous fundraising effort the small, but imposing, island off Scotland's West Coast was acquired in 1992 to fulfill Lama Yeshe's dream of establishing a long-term Buddhist Retreat at the south end of the island and an Interfaith Centre for World Peace and Health at the north end. The beautiful island was home to rare breeds of Eriskay ponies, Soay sheep and Sanaan goats and has since become a haven, not only for wildlife but also for the many visitors who come on pilgrimage to its sacred sites, or to enjoy a wide range of retreats and courses.  Under Lama Yeshe's guidance, and with the help from supporters around the globe, Holy Isle has become a model of environmentally-friendly living where humans and animals live in peace and harmony.

The new Centre, with its tasteful accommodation and spacious Peace Hall, was opened to the public in May 2003 and now hosts regular courses and retreats while, at the south end of the island, the original light-house cottages have been beautifully renovated to create a long-term retreat house for women.  The first traditional Buddhist three-year, three-month retreat on Holy Island was successfully completed in March 2006 by a multinational group of women from eight different countries. 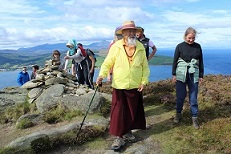 Lama Yeshe also travels extensively, giving teachings at many associated Samye Dzong branches around the world and participating in numerous interfaith events at the highest level.  In November 1998 he received the 'Sasana Kirthi Sri' award at the International Sarvodaya Bhikku Congress in Sri Lanka and is the first Tibetan Lama to make such a connection with the Theravadin community and receive this high honour.  Furthermore he was invited to tour the Buddhist sacred sites of Burma by Dr Rewatadhamma followed by a pilgrimage to the Thai Buddhist holy places hosted by Ajahn Sumedho.  In the same year Lama Yeshe became the first Tibetan Buddhist Lama to act as preceptor in a multi-national ceremony bestowing full ordination to over a hundred women, including a group of eleven nuns from Samye Ling. 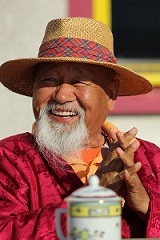 His participation in inter-faith dialogue at home and abroad continues apace on both national and international levels.  On Holy Island in August 2003, he hosted a visit of the Religious Leaders of Scotland and has forged lasting friendships with several of his fellow faith leaders. In February 2002, he attended the European Parliament in Brussels as the guest of the Moderator of the General Assembly of the Church of Scotland. Later that year, during the celebration of Her Majesty the Queen's Golden Jubilee, he was invited to a reception at Buckingham Palace where he met members of the Royal family and presented Her Majesty the Queen with a traditional silk scarf and Tibetan thanka (religious painting.

Under this guidance the final phase of the Samye Project (the Samye College, Museum and Libraries) was completed at the end of 2012.

As Chairman of Rokpa Trust he has responsibility for Kagyu Samye Ling, The Holy Isle Project and Kagyu Samye Dzong Centres worldwide. He is also involved in the Trust's charitable projects both at home and overseas.  His energy and inspiration fuel the Trust’s far reaching activities which benefit so many people in so many ways.  Indeed, he is a living example of the joyful Bodhisattva in action. 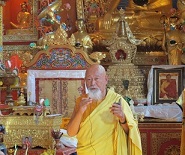 In October 2013, following the tragic death of  his brother and mentor, he assumed overall responsibility for the leadership and direction of ROKPA worldwide.

At this point Vajradhara Chamgon Khenting Tai Situpa bestowed the title of ‘Choje’ as a token of Lama Rinpoche’s courage and ability in managing such a vast array of different beneficial activities.

Click here to read some of the teachings Lama Rinpoche has given in Samye Ling.

And click here to see an interview of Lama Rinpoche by Dr Desmond Biddulph of the Buddhist Society following the publication of 'From A Mountain in Tibet'.