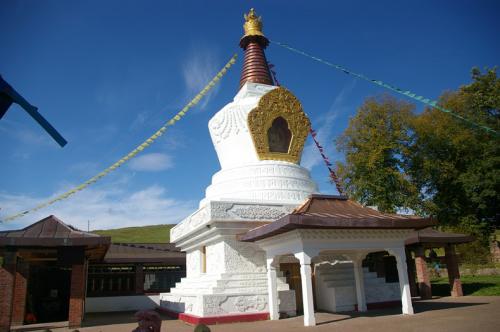 The Samye Ling Victory Stupa, the first authentic Stupa in Britain, was consecrated in Scotland on August 3rd 2000 on Dharmachakra Day by Sangye Tenzin Rinpoche. The consecration marked both the New Millenium and the 60th Birthday of Choje Akong Tulku Rinpoche, the Founder of Samye Ling. Constructed, filled and decorated according to ancient lineage instructions, the Stupa was dedicated to Healing the Environment and overcoming obstacles to World Peace.

A Stupa (or 'Cho-ten' - Tibetan for 'basis of offerings') is a 2,500 year old tradition introduced and taught by Buddha Sakyamuni to help transform and purify imbalance in the environment. The measurements of the outer form have to be extremely precise and the inner contents specific and properly placed and consecrated. Much of the building process demands that those involved should either be ordained monks and nuns, or maintain vows of ethical conduct, and for some parts of the process should repeat prayers continuously. All these specific instructions were observed in the building of the Samye Ling Victory Stupa.

Fulfilling these instructions creates an energy field that purifies and balances the internal and external elements of Earth, Fire, Air, Water and Space, that compose the universe. 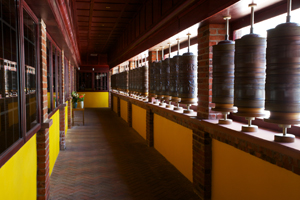 The "Mani korlo" or Prayer Wheel House standing on three sides of the beautiful Samye Ling Victory Stupa, was consecrated in a traditional ceremony by Choje Akong Tulku Rinpoche on 7th July, 2007. Each of the forty-five Prayer Wheels contains millions of prayers. The energy and blessing of these prayers are activated and spread throughout the environment as the wheels turn. Electric motors turn the wheels very slowly so that the prayers are continuously transmitted day and night, but individual pilgrims can also turn the wheels by hand as each one has a beautifully turned wooden handle. They then gain the merit of saying these millions of prayers for all beings and for the planet itself.