Establishing a Steady Foundation for Practice 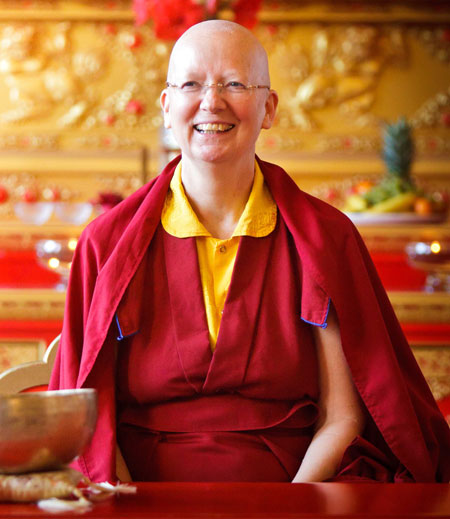 Lama Zangmo first became a practising Buddhist when she arrived at Kagyu Samye Ling in 1977 and took refuge with His Holiness the 16th Karmapa, Rangjung Rigpe Dorje. She was inspired to enter the four-year closed retreat in 1984, during which time she became ordained as a Buddhist nun.

Lama Zangmo went on to complete a further two retreats, bringing the total number of years spent in retreat to eleven and a half.

Choje Akong Tulku Rinpoche and Lama Yeshe Losal Rinpoche then asked Lama Zangmo to put her experience to good use by helping to run Kagyu Samye Dzong London, which was officially opened in 1998. Since then the London Centre has flourished under Lama Zangmo’s guidance and established itself as a much needed Dharma Centre in the capital city, providing a full and varied programme of teachings and events throughout the year.

Lama Zangmo’s strong connection with Kagyu lineage and in particular with Choje Akong Tulku Rinpoche and Lama Yeshe Losal Rinpoche has inspired her to work tirelessly and joyfully in service to the Dharma and helping others. In recognition of her long experience, selfless qualities and commitment, she became the first person in the UK to be honoured with the title of Lama by our organisation at a heart warming ceremony in Kagyu Samye Dzong London in June 2001.